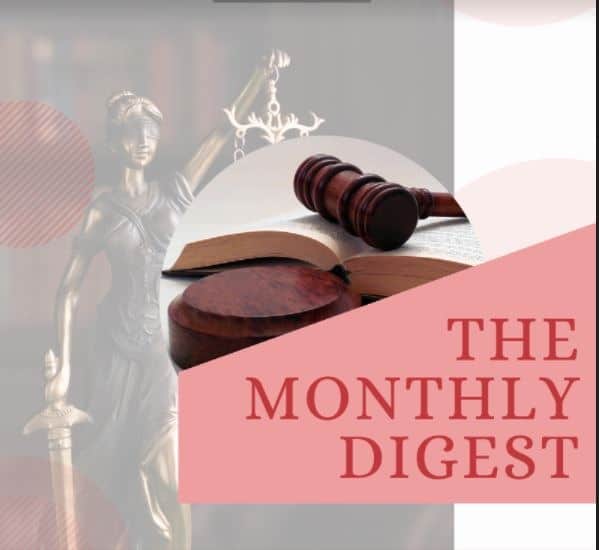 Rule 13 of the National Financial reporting Authority (NFRA) Rules were amended and notified by the Central Government. The amended rule states that anyone who acts contrary to the provisions of these rules will be punished with fine not exceeding Rs. 5000 & where the act is a continuing one, added fine not exceeding Rs. 500 for everyday the contravention continues. Read More

The Ministry of Corporate Affairs (MCA) has released a notification regarding the Companies (Appointment and Qualification of Directors) Amendment rules. In rule 6, sub-rule (4) was amended by the Central Government regarding the individual whose name has been removed from the databank. Read More

The Ministry of Corporate Affairs (MCA) has released a notification regarding the Companies (Appointment and Qualification of Directors) Amendment rules. Rule 8 proviso, Rule 10, sub-rule (1) was amended by the Central Government. Read More

The Ministry of Corporate Affairs (MCA) has released a notification regarding the Companies (Removal of Names of Companies from the Register of Companies) Amendment Rules, 2022. In Rule 4, after sub-rule (3), an additional sub-rule is inserted, Form No. STK 1, Form No. STK- 5 & Form No. STK-5A are to substituted with amended forms. Read More

SECURITIES AND EXCHANGE BOARD OF INDIA (SEBI)

2. Names of the companies/Intermediaries/MIIs having complaints pending for more than 3 months on SCORES as on May 31, 2022

4. Extending the facility for conducting annual meetings and other meetings of REIT and InvIT unitholders via Video Conferencing (VC) or other audio-visual means (OAVM)

On 3rd June, 2022, SEBI issued a circular regarding amendment to clause 4 of the circular dated November 6, 2020 making substitutions in Arbitration & Stock Exchanges and Depositories. Read More

6. Procedure for seeking prior approval for change in control of Portfolio
Managers

This circular is issued in exercise of the powers conferred by Section 11(1) of the Securities and Exchange Board of India Act, 1992, read with Regulation 43 of the SEBI (Portfolio Managers) Regulations, 2020, to protect the interests of investors in the securities market and to promote and regulate the securities market’s development. Read More

1. Export Target of $1 Trillion to Be Achieved by 2030 Says MOS Finance

Minister of State for Finance, Pankaj Chaudhary, is very confident that the government will achieve its export target of $1 trillion by 2030. He represented his confidence by assuring that they will for sure reach the goal. Read More

Prime Minister Narendra Modi launched development projects worth 30,000 crore rupees. On the completion of this project, Karnataka’s GDP will increase by 2%. Karnataka recently became a center of attention for FDI. The state has seen fantastic progress in agricultural production and manufacturing as well, attracting the highest FDI. Read More

According to the most recent report, India’s EV start-ups are expected to more than triple their FDI to 20 billion by 2030. Keeping environmental benefits aside, India is expected to save more than USD 14 billion & to create 10 million jobs in India by 2030. Read More

Tencent, a Chinese tech company, struck an investment deal of a 0.72% stake in Flipkart with its founder, Binny Bansal. Tencent Holdings carried out this purchase of shares worth $264 million (or 2,060 crores) from Bansal through its European subsidiary. Read More

Borge Brende, President of the World Economic Forum, described India as one of the main drivers of the global economy amid post-Cold War disruptions and ongoing turmoil in Ukraine during a panel discussion. Read More

6. India and UAE to Build New and Strong Bonds in the Advanced Technology and Industrial Sectors

Recently the MoU between India and the United Arab Emirates has been signed that entails their cooperation in the Industrial and Advanced Technology Sector. Read More

Despite a decline in Foreign Direct Investment (FDI) into India significantly from $6,400 billion to $4,500 million between 2020 and 2021, India ranked among the top 10 countries of the world in the United Nations Conference on Trade and Development’s (UNCTAD). Read More

Maharashtra’s delegation to the World Economic Forum Annual Meeting 2022 in Davos was a success. The state secured investments worth INR 80,000 crore (USD 10.5 billion), with 24 companies and three memorandums of understanding signed. Read More

In recent years, the Indian telecom sector has seen significant reform to improve sectorial health and ease of doing business. Foreign investors can now invest up to 100 percent in any local Indian company without government approval. Read More

The Reserve Bank of India in press release dated 21st June, 2022 provided data on the performance of the private corporate sector in the fourth quarter of 2021-22, based on abridged quarterly financial results from 2,758 listed non-government non-financial (NGNF) companies. Data for Q4:2020-21 and Q3:2021-22 are also presented in the tables for comparison. Read More

The Reserve Bank of India, in exercise of powers conferred on it under Section 45-IA (6) of the Reserve Bank of India Act, 1934, has cancelled the Certificate of Registration (CoR) of Malik Motor Finance Limited. Furthermore, the RBI, in exercise of powers under Section 29A (6) of the National Housing Bank Act, 1987, has cancelled the CoR of two other companies. Read More

The Statement on Developmental and Regulatory Policies, was released as part of the Bi-monthly Monetary Policy Statement for 2019-20, for information on the issuance of Directions on the exchange of variation margin (VM). The draft Directions were reviewed and finalised based on feedback received from market participants. The RBI dated its circular RBI/2022-23/93 provided for Master Direction- RBI (Variation Margin) Directions, 2022 in exercise of the powers conferred under section 45W of the RBI Act, 1934. Read More

As the digital eco-system and connected Internet users in India expand, so do the challenges and problems faced by them, as well as some of the infirmities and gaps that exist in the current rule vis-a-vis Big Tech platform. Therefore. New amendments have been proposed to the IT Rules 2021, to address these challenges and gaps. Read More

2. Inviting Expression of Interest (EoI) for transfer of technology of SMART ENERGY METER

The Ministry of Electronics and Information Technology (MeitY), Government of India, launched the National Mission on Power Electronics Technology (NaMPET). India in 2004, with the goal of enabling the country to become a dominant player in Power Electronics Technology. Companies with skills and experience in mass manufacturing of electronics equipment, particularly energy metres, or with good knowledge of the utility metering business who are willing to take on the production and deployment of Smart Energy Meter technology in accordance with the C-DAC ToT guideline agreement are eligible to apply. Read More

In order to rein in cybercrime globally, member states must agree on a cooperation framework for “freezing and return” of proceeds obtained from cybercrime, Indian officials stated while addressing the UN Ad Hoc committee, which met in Vienna between May 30 and June 10. Read More

4. Switch over to e-office completely by June 30, Delhi govt tells all depts

In 2015, the Delhi Cabinet approved the implementation of e-office in all departments, autonomous and local bodies of the Delhi government, and the IT department issued various circulars in response. Some departments implemented it, but the new order mandates that all departments make the switch. According to the guidelines, all orders, circulars, and sanction orders issued in offline mode must be uploaded to e-office. Read More

According to Startup Genome’s separate ‘Global Startup Ecosystem’ report,the Asian scenario in the sector that was once dominated by Beijing,Singapore, Hong Kong, and Korea is now being significantly disrupted by the likes of Bengaluru, Mumbai, and Delhi.Read More

The government has designated ICICI Bank’s IT resources as “critical information infra.” Any harm to it can endanger national security, and anyone who gains unauthorised access to it may face imprisonment. Read More

2. Most OK with higher GST on e-games, crypto

A majority of Indians want the government to levy a 28% or higher goods and services tax (GST) on cryptocurrencies, online gaming, casino and horse racing. But they are against a GST hike on household goods. Read More

The Gujarat High Court has ruled that the High Court cannot decide disputed factual issues in a petition filed under Section 11(6) of the Arbitration and Conciliation Act, 1996 for the appointment of an arbitrator. “All these issues, including arbitrability, can be examined by the Arbitral Tribunal itself,” the Bench, led by Chief Justice Aravind Kumar, observed. Read More

2. If ‘Value of Commercial Dispute’ Is More Than Rs. One Crore, Section 9 Application Under A&C Act Would Lie Only Before the Commercial Court: Telangana High Court

The Telangana High Court has ruled that if a dispute is classified as a ‘commercial dispute’ under Section 2 (1) (c) (vii) of the Commercial Courts Act, 2015, and is the subject of a domestic arbitration with a ‘Specified Value’ of more than Rs. One Crore, an application under Section 9 of the Arbitration and Conciliation Act, 1996 (A&C Act) would lie only before the Commercial Court and not before the Civil Court. Read More

3. Even In the Absence of An Arbitration agreement, The Matter Can Be Referred to Arbitration Under Section 18 Of the MSMED Act: Punjab and Haryana High Court

The Punjab and Haryana High Court ruled that even if the parties do not have an arbitration agreement, the matter can be referred to arbitration under Section 18 of the Micro, Small and Medium Enterprises Development Act, 2006. (MSMED Act). Read More:

1. Indian economy expected to grow by 7.5 per cent this year: PM Modi

According to Prime Minister Narendra Modi, the Indian economy will grow by 7.5% this year, making it the fastest growing major economy. He emphasised the growth of India’s digital economy, claiming that its value will reach USD one trillion by 2025 and that the government is encouraging innovation in all sectors. Read More

1. India’s food inflation likely to top 9% in second half of 2022, according to Nomura

Jaipuria was accused of communicating unpublished price-sensitive information (UPSI) about a strategic partnership between Varun Beverages Ltd (VBL) and PepsiCo for the sale and distribution of the larger Tropicana to two individuals. Shares of Varun Beverages, PepsiCo India’s bottling partner, were traded based on the information. As a result, it was held that Jaipuria, as an Insider with UPSI, communicated the same and violated insider trading
rules. Read More

Following the registration of case, a team of over 50 officials from the agency carried out coordinated searches in Mumbai at 12 locations belonging to listed accused in the FIR which also includes Sudhakar Shetty of Amaryllis Realtors and eight other builders. Read More

The Green View residents have been demanding a refund of the flat cost with 15 per cent interest, registry charges, interior cost and a compensation of Rs 25 lakh for ‘mental harassment’. Read More