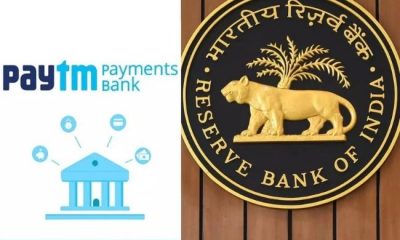 Paytm, a company launched in 2009, is one of the largest payments platform in India based on the number of consumers, merchants, transactions, also as per the revenue for the financial year ended March 2021. It is a mobile-first digital payments platform to enable cashless payments for customers giving them the power to make payments from their mobile phones. It started with bill payments and mobile top-ups as the first use cases, and Paytm Wallet as the first Paytm Payment Instrument.
Paytm Payments Bank is one of the payment instruments of Paytm. That on 11 th March 2022, the Reserve Bank of India (RBI), directed Paytm Payments Bank Ltd & to stop, with immediate effect, onboarding of new customers.

The notice issued by the RBI, reads as follows:-

FROM WHERE DOES RBI GET THE POWER TO IMPOSE RESTRICTIONS ON PAYTM PAYMENTS BANK?

The RBI took action in exercise of its powers under Section 35A of the Banking Regulation Act, 1949. Section 35A gives RBI the power to issue directions to prevent the affairs of any banking company being conducted in a manner detrimental to the interests of the depositors or in a manner prejudicial to its own interests.
Earlier on June 19, 2018, the RBI had prohibited Paytm Payments Bank from opening any new accounts and wallets on account of supervisory concerns, which were lifted with effect from December 31, 2018. In a separate instance, the office of the banking ombudsman had issued a show-cause notice dated March 6, 2019, noting that Paytm Payments Bank could not monitor a certain account maintained with it which had shown a sudden increase in the velocity in daily transactions involving immediate transfer to other banks. The RBI ruled that the action resulted in the violation of provisions of it’s “Know your customer” (KYC) norms.

ABOUT THE AUTHOR
Ketan Joshi
Ketan is an Associate with Maheshwari &amp; Co. He specializes in E-commerce and startups compliances across PAN India. He has done various transactional and advisory work for startups. He has significant experience in drafting a wide range of legal agreements, contracts, applications, and petitions on various commercial & corporate matters pertaining to E- commerce, Startups, the Negotiable Instruments Act, Civil & family law matters etc.
He has been regularly appearing before various forums and quasi-judicial bodies including National Company Law Tribunal, National Company Law Appellate Tribunal, Debts Recovery Tribunals, District Courts and High Courts. He has also been actively taking care of various secretarial works including drafting of minutes, agendas, notices, filing of forms, maintaining of registers, etc. for various public and private sector companies.

Conatct form
Thank you for your interest. We have received your form and will get in touch with you  soon via email or phone.
Get ready for some Maheshwari & Co.!
Open chat
Maheshwari & CO. - Corporate Law Firm
Hello,

As per the norms set by the Bar Council of India, law firms are not authorized to solicit work and publicize. All the information, publications and legal commentary provided on Maheshwari and Co. is for illustrative purposes only and should not be regarded or relied upon as legal advice. While the content provided is accurate as at the date of first publication, it is updated frequently when laws and regulations change. The site clearly states it is not intended to be a source of advertising or solicitation, nor is it an invitation for a lawyer-client relationship, and transmission, receipt or use of the site does not constitute or create a lawyer-client relationship.

By clicking the “I Agree” button and retrieving information from the website, the user accepts that he/she is doing it out of free will and any reliance on the information contained on www.maheshwariandco.com is solely at the user’s own risk. Specific legal advice should always be obtained before acting upon any information or commentary provided on the site. Further, the recipients of content from the site should not act, or refrain from acting, based upon any or all of the contents on the site.